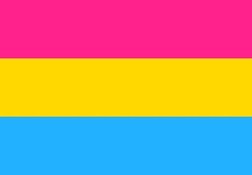 Nope, pansexuals aren't attracted to pans, pots, and other cooking utensils! Pansexuality is defined as an attraction to people regardless of their sex and/or their gender. Some pansexuals may even define it as being blind to other people's sex/gender when it comes to romance and sex. Pansexuality and bisexuality are sometimes mixed up by those who don't yet fully understand the gender spectrum, but they are two different things. The word is derived from the Greek root "pan", which means "all".
Polysexuality is very similar to pansexuality. While pansexuals are attracted to all genders and sexes, polysexuals are attracted to some, but not all. For example, a polysexual person may be attracted to most people regardless, but is uncomfortable with the idea of being with girls. Polysexuality is one of the most diverse sexualities, as each different person may have their own parameters of what they're attracted to. Again, polysexuality is sometimes confused with bisexuality by people who don't fully understand the concept of gender.
Powered by